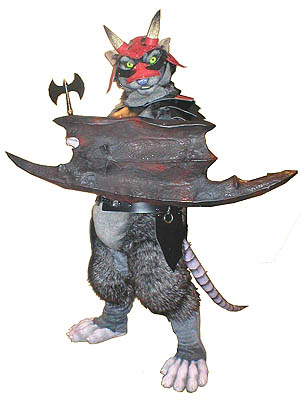 Scribblefox and I talked about what kind of suit I was interested in. This has been in the design/creation stage for over a year. This is before I had Vortex, my other 'evil costume'. I noticed there were not many proper Rat costumes about, so, I offered that as an idea.

From there, SF took off and did some detailed designs including some AWESOME leather armor. From that point, he was a Skaven from the game Warhammer.

Some interesting features about the costume: Has a body-pod built in, so the torso hangs about where my human knees are. The fingers and toes are elongaged/extended way beyond my human ones, All the leather is removable so I can be a regular rat, the eyes and teeth glow under UV light, the jaw moves, and the shield was created by the awesome Ed Martinez whom I met a few years ago through Legend Griffin.