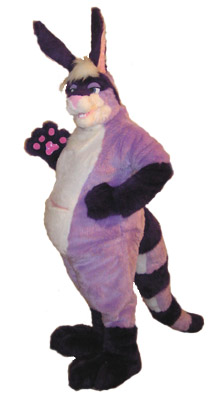 I had the idea in my head, but Yippee was nice enough to draw her out for me.

Why? I thougth that mixing a Raccoon with a Kangaroo (KanCoon) would be super fun!
She didn't have a name until when she debuted at Further Confusion 2009. At FC she won
"First Prize in Journeyman". This is the last time I can enter Journeyman.