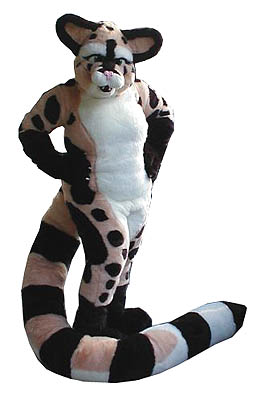 Genna Ringtail is a Large-Spotted Genet cat(also known as a Ringtail cat).
They originate from South africa. Their tails can be longer than their torso. Very cute, interesting critter.

I created Genna because there were only I belive two other ringtail critters like this around. The most famous of course, being Chester (who still has a tail that is 3 inches longer than mine, which mine is 8'3" long) and one other older costume I haven't seen in years. Though, similar in looks, Genna is not the same critter as Chester who is a cacomistle. I thought it would be cute to make another female critter after I finished Aby.
Frysco was the one who named her Genna.

Genna won 1st Place in the Journeyman's Catagory at FC 2004.