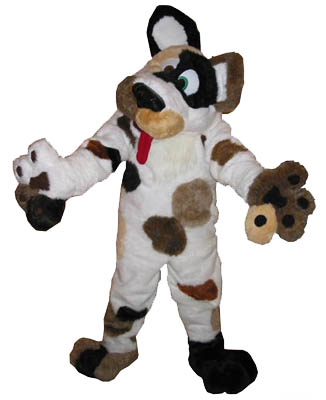 Around October 2004, I was getting itchy to build another suit.
It had been a year or so since I build Genna, so I tried to think of what
I could do with all this extra fur I have in my collection. I have a LOT of fur so I
thought, "Why not use the scraps and make a Patch Puppy?"

A friend gave me two rolls of this short, decent white fur, so I figured that's what I
would use as the base color. Some of the other colored spots came from Brokken who
happened to be moving soon and wanted to get rid of some scraps, so I took two huge
bags of his scraps, and that was PLENTY for what I needed them for!

I got a HUGE surprise going to Conifur in 2004. Matrices who was doing a fursuiting
panel had this large dog head carved out of foam. Afterwards, I asked what she was had
planned for it, and she said she was bored with it and probably nothing. I told her she
better not throw that away! (I totally saw my doggy in it!) So she asked if I would
take it and make something out of it! I told her HELL YEAH I will!

So, that's how Bingo, The Patch Puppy came to be.